Michelangelo was commissioned to build a tomb in 1505.  Like the crime scene investigation  you are about to read on this page,  the "tomb",  with  the central feature of the statue of Moses,  became one of the greatest disappointments of Michelangelo's entire life!

For unexplained reasons,  Pope Julius II who commissioned it,  continually interrupted the commission and because of these constant interruptions,  it took the great renaissance man 40 years to complete.

The  statue of Moses was never finished to Michelangelo's satisfaction, although he felt this was his most life-like creation.  It was so life-like, in fact, that, upon his completion, Michelangelo struck the right knee of Moses, commanding the marble masterpiece to "Now Speak!" -  Michelangelo felt that life was the only thing left inside of the marble. 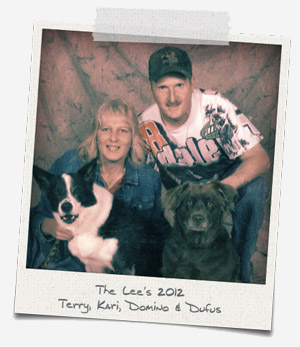 They have been hammering away at a crime scene investigation, for over 10 years now, trying to find the key to identifying a young woman and the only "hard" evidence they have are these two rings. The young girl was discovered deceased August 1971, with no identification near the California/Oregon border. This case is one of the hardest of all the unsolved crimes in the Josephine County.

No marble statue was she, but made of flesh and blood, a young woman who had a mom, dad, possibly sisters and brothers, friends and maybe a boyfriend or partner.

These two rings, and a few remnants of clothing held in the sheriff's property office are all that remain.

One ring has a silver colored twisted double wire band with an open back and set with an oval MOP imitation in a distinct setting. Note the letters AL scratched into the surface. The ring in the left image above is a Sterling Silver band marked STERLING with diagonal chevron style banding and the sponsors mark M-H between two arrows on the inside band. 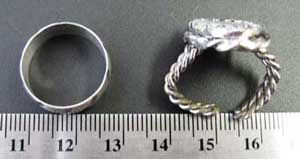 The rings are not what you'd describe as  "beautiful"  but not easy to forget either. Does anyone remember seeing these two rings, or the girl wearing them before August 1971?  Or does anyone remember selling the rings? The artisan who made this MOP ring can now speak up! Maybe someone could provide a distribution list of McGrath-Hamin, Inc - the manufacturer of the Sterling Silver ring  band?

Photo top of  page:  The Moses (c. 1513–1515) is a sculpture by the Italian High   Renaissance artist Michelangelo Buonarroti, housed in the church of San Pietro in  Vincoli in Rome.

Get Behind the Cue & Advertise With Us!

Return to the top of Crime Scene Investigation