The History of Jewelry
Uncovers the Future of Jewelry 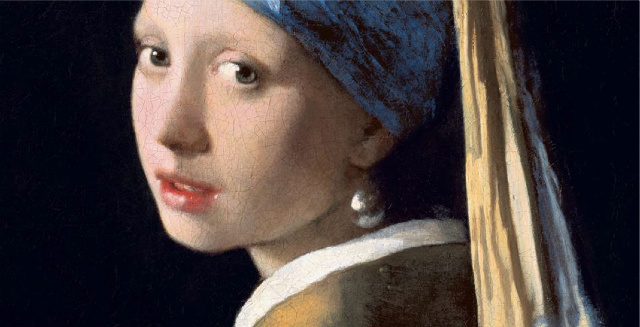 You won't find another  ‘History of Jewelry' (and there's lots of ‘em) anything, and I mean anything, like what you're about to read. None exist. (unless I've been copied again;-)

The history of  Jewelry and its future are worlds apart,  yet remain inexplicably linked, yet hardly ever considered  as one complete, whole ‘something’. Maybe, the Jewelry shoobies  are too busy trading mass produced Jewelry to consider the History of Jewelry narrative at all.

Let's reconsider,  for arts' sake,  Jewelry over time. Cognitive behavioural therapy  can help here... glance back over your shoulder,  just like the Girl with a Pearl Earring painting masterpiece (top of this page) and Google stalk Jewelry past. You won't have to search very far, as the subject is what this entire website is dedicated too.

When you look at the  Natural Pearl earring dangling from her ear, you can't miss that gleaming light-filled pearl right?  The pearl, like Jewelry History,  is  now in the foreground. What has proceeded it, and what succeeds it, lest we forget, holds great significance for our present and future generations.

From this new perspective, we see Jewelry History as a  Magic Baroda Carpet Ride on the bejewelled horizon of generations  gone by,  continually being  interrupted  by wars and politics, economic crises, black swan events  and Yet, and here's the thing -  shaped and propelled by those very same forces.

Fine estate & period Jewelry created by his master art is an enduring legacy  of the human narrative, in its highest and purest form, expressed as only a  true craftsperson can  express it. As we look in absolute fascination at the master craftsmanship imbued in Jewelry  past,  we know, without any shadow of a doubt, postmodern Jewelry was merely practice, during the Art Renaissance  intermission.

Jewelry in a World Without War

So how will the Jewelry narrative be interpreted in the future ? Can it even survive in a world without the interruptions of war, economic crises, etc?

Most Antique Jewelry narratives, written with historical bias,  refer  to the different styles and periods and considers the continuing presence or absence of similar features. In this sense, the alterations of stylistic periods are marked by, yep, Historical events such as..err... the two world wars of the 20th century, the wall street crash of 1929, the economic boom following the second world war.

By examining  Famous Jewelry Collections and other fine examples, we might arrive at a closer idea as to the origin and nature of the Jewelry,  by examination of the metals used, the applied gold-work and the stones they may contain; for they remain free of historical bias.  I mean... stones and bones don't lie;)

What's Truly Antique in the History of Jewelry?

Technically, Antique Jewelry is Jewelry that has survived 100 years or more, some argue 70 years only, in both cases, making it is a witness to a previous generation in history.

Historically, however, "antiques" hold a particular reference. Those antiquities are  from Old Greek and Roman civilizations, known as the 'Age of Antiquity'.

In the Pantheon of Jewels,  Antique Jewelry and 20th-century Jewelry is an ongoing commodity,  and yet provides hard evidence  of humanity at its very finest.  Magnificent Jewelry holds special significance in history.  It has strength, beauty and  roars quality and importantly often provides a more truthful  account of  human history  than many written historical accounts.

By cross-referencing period styles, forms and the materials used in the history of Jewelry, dealers, and collectors can period date pieces with a greater deal of accuracy. After-all, bones & stones, antique diamonds, including the amazing  blue gemstones, and  antique gold work don't lie.

Antique Jewelry and 20th-century Jewelry may be embellished with precious and non-precious gemstones.

Each piece tells it's own story. Many pieces  express great love. Local culture and tradition often made it impossible for couples in love to express their love openly in the past - here, Jewelry came to the lover's rescue! It offered a subtle  form of expression with forever lasting quality.

Click here to find out the meaning of wedding rings...

Fine Jewelry, crafted using Jewelry techniques practiced during that period, involved materials that were popular in that same period.

Camilla Duchess of Cornwall's Diamond Engagement Ring is a perfect example of the linear perfection in Art Deco Jewelry of the 20s.

Antique Jewelry is categorized into separate period styles. Time-traveling into the past, let's take a closer look at each design period...

Premier Jewelry, gemstones, and Natural pearls have answered a deep and personal love of beauty throughout each of the period styles in the history of Jewelry.  But that's just half the story.

Jewelry, gemstones and Natural Pearls have also been used strategically in world politics, and arguably quite brilliantly by British and French royalty, such as Emperor Napoleon and the acquisition of fine Jewelry of the Georgian period.

Key points in the Histories of Jewelry:

Click on the links below to enter the decorative periods during the History of Jewelry.

Back to the Future of Jewelry

So, what sense can  we make of Jewelry in the Future? Does it even have a future?

I mean, since 1918, few Jewels have been designed for court wear in any country and since 1939, even less. Besides, for political and economic reasons, the West does not encourage the making of such splendid Jewelry anymore.

So they say, too every cloud, there's  a silver lining. Here's my silver lining, for what it's worth:  scarcity increases the demand for fine Antique Silver and Gold Jewelry, Period and Estate Jewelry already in short supply, will become even more scarce, and therefore more sought after by future Antique Jewelry Investors to love and appreciate.

In concluding, Lest We Forget - the  History of Jewelry has been continually punctuated  by war &  “reeking tube & iron...".

Could we consider,  the Jewelry narrative, next time round, in a world without war and economic crisis events in the future, by considering the grammar of her?

Return to the top of History of Jewelry