The  Baroda Pearls are one of the most important Natural Pearl necklace strands (originally seven strands) in the world. They formerly resided  in the Baroda treasury that dates way back to Mughal times.

In 1943, Maharaja Pratapsingh Gaekwar made headlines by marrying Sita Devi, his second wife. Western media referred to her as the India equivalent of Wallis Simpson.

Sita Devi went on to become one of the most flamboyant maharanis of all time, known for her passion for fine Indian Jewelry and the Maharaja being madly in love with her, quite literally, Cast his Pearls before her - including  the priceless Baroda pearls!

Upon marrying the maharaja, Sita Devi received the Famous Collection of jewelry and objects from the Baroda treasury which included the extraordinary textile, the famous bejeweled Pearl Carpet of Baroda, circa 1865-70, originally commissioned as a gift for the tomb of the Prophet Muhammad. 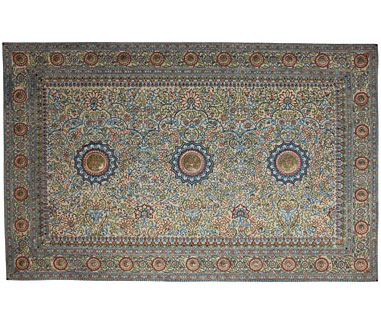 Other splendid objects of the Baroda treasury, includes the renowned seven-strand pearl necklace and the three-row diamond necklace suspending the Star of the South and the English Dresden.

While many of Sita Devi's jewels were sold in Monaco in later years, the seven-strand pearl necklace remained a part of the Baroda royal treasury.

The Baroda Pearl necklace strand is the historic two-strand Natural Pearl necklace of sixty-eight graduated pearls, measuring approximately 9.47-16.04 mm, with a diamond clasp made by Cartier.

The fourth, fifth, sixth and seventh strands of the world-renowned seven-strand Baroda necklace, a brooch, and a ring en suite, set a world auction record of $7,096,000 in April, 2007 in New York.

The Maharajah of Baroda, was the most influential of the Indian princes and exemplified a princely state of mind, attracted not only to little Pearls but also to precious gemstones and Gold in India.

His court tunic was spun from real gold, with only one family in his state allowed to weave its threads.

The family's fingernails were grown long and then notched like the teeth of a comb, all the better to caress the golden threads to perfection!

For certain, the Lord Maharaja of Baroda thoroughly enjoyed displaying his royal joules and was not hesitant to cast his pearls before the woman he adored - lady of the manor - Sita Deva!

Pearl necklaces of such important size, quality, signature, and provenance rarely appear on the market.

In November 1999, Christie's Geneva sold a single-strand pearl necklace, which belonged to Marie-Antoinette, Princess of Hungary and Bohemia, Archduchess of Austria and Queen of France, and later by the American Woolworth heiress Barbara Hutton.

(On the subject of Austrian Jewels,  did you read about the Medieval Austrian treasure found buried in someone's backyard?)

Five years later in November 2004, Christies Geneva offered a two-strand pearl necklace--double the number of pearls and equal in size to the Marie Antoinette/Hutton necklace--which sold for $3,128,520.

Return to the top of Baroda Pearls