Jewel of the Month by Jar 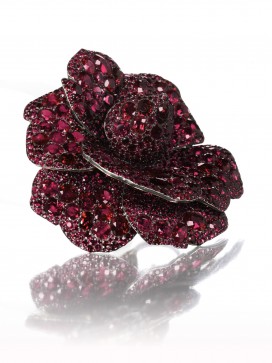 The Ruby Jewel of the Month was formerly owned by Lady Lily Safra. Lady Safra was a bright yellow flower herself ("Safra" is an Arabic word, and the English translation is "something yellow") who was married to Edmond J. Safra (Arabic: ادموند يعقوب صفرا‎; August 6, 1932 – December 3, 1999) a Lebanese-Brazilian Jewish banker.

The Camellia Ruby Jewel was part of a collection of the  Jewels of Hope: the Collection of Lily Safra.

Auctioned by Christie's in May 2012, proceeds exceeded all pre-sale estimates. Lily Safra herself also added to their value, as she was so dedicated to art and jewelry.

The Camellia flower was named after Joseph Kamel 1661 - 1706, a Moravian Jesuit who described botany of the island of Luzon in the Philippines. A flowering evergreen of the tea family, the Camellia flower is a native of China and Japan. The symmetrical beauty of the Camellia and it's long-lasting quality has been appreciated by young lovers as a token for expressing love for each other.

The Camellia is highly respected in Southwest China and is the national flower of the ancient southern kingdom of Dai Li.  This land is marked by steep hills and raging rapids and the hills and valleys of the kingdom are transformed into a sea of ruby red and white in early spring.

Auctioned at Christie's in Geneva on May the 14th, the sale was the largest single owner selection of pieces by JAR.

Felice Leiftinck, jewelry specialist at Christie's said the appeal was in the fact that JAR "is as much an artist as a jeweler and his pieces are colorful, eccentric, completely different from normal jewelry."

Looking at Camellia Ruby-Red Jewel, naturalized in this expressive three-dimensional piece, sharing similarities of form with the Brazilian Green Quartz Trumpet Flower and 1st Place Gemmy's Winner in 2011, one would have to agree with Felice Leiftinck.

Gold and silver, as the principle monetary metals, as well as platinum and palladium (secondary monetary metals) will be part of the formula that determines the fair value of any future global currency. http://www.marketoracle.co.uk/Article27347.html

Guide to Investing in Gold Jewelry can be found Here...

February Jewel of the Month 2010 SOLD

May & June Jewel of the Month SOLD

September Jewel of the Month 2010 | Treasure of Vergina - Famous Treasure!

May Jewel of the Month 2011| Cartier "Halo" Tiara - ARABIC Translation

March Jewel of the Month 2012 | Amphitrite in Aquamarine Cameo Carving

Jewels of the Month |ARABIC Translations

Return to the top of Jewel of the Month