October Jewel of the Month 2010

The  Emerald and Diamond Necklace
Designed  by Ja
han
SOLD 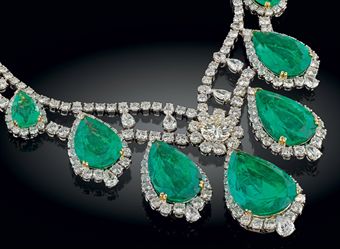 This magical Jahan Emerald & Diamond necklace that sold at auction on the 27th of October 2010  would turn emerald gemstone lovers  around the world green with envy!

For October Jewel of the Month on Antique Jewelry Investor  features a fairy-tale emerald and diamond necklace which was part of a set of jewels  auctioned at Christie's Auction House in Dubai on the 27th October 2010.

Christie's in collaboration with Persian Jewelers returned to the joy-de-Vivre of the
post World War II  'New Look'  of  Ballgowns and Parures.  The New Look created a revolution in fashion and jewelry.  After years of war and brutality, the world was ripe for change.  Dior's 'New Look' reminiscent of the Belle Epoque ideal of long flowing skirts, tiny waists, fabrics that mother had worn in the early 1900s and Jewelry Parures.

Sumptuous jewelry & parures  sold in Dubai at Christie's Auction October 2010, like the emerald and diamond necklace featured on this page.  Created by  designer jeweler, Jahan.  The firm Jahan  is one of the most prestigious jewelers in the Middle East and has been in family hands for  generations.  Their superb jewels have  given them opportunities to create rare objects of astonishing beauty for the Middle Eastern elite, dignitaries and royalty.

This magnificent necklace  was part of a suite of jewels and  embellished with very large pear-shaped Colombian emeralds weighing a total of 158 carats. The necklace is made in 18k white  and yellow gold and signed by Jahan.

The idea of sets of jewels consisting of necklace, ring, brooch, earrings and sometimes a tiara goes back to Roman times.  It was not until the 17th century that the word "parure" was first applied to a set of three or more matching pieces of jewelry.

From the 18th to the early 20th century, parures became more elaborate and reflected the fashions of the day.  Decorated en-suite with different  gems or made of the same variety of gemstone, each piece in the set of a  parure  was intended to be worn  at the same time. The modern term is sometimes called a "suite". Less than a full set is called a "demi-parure".

After the first world war costume jewelry designers like  Chanel advocated a more simple, liberal form of dress that made the parure  redundant.

At this auction, it was Christie's turn.

Information on Christian Dior can be found at:
http://design.designmuseum.org/design/christian-dior

Return to the top of October Jewel of the Month 2010