The Maharajahs of India 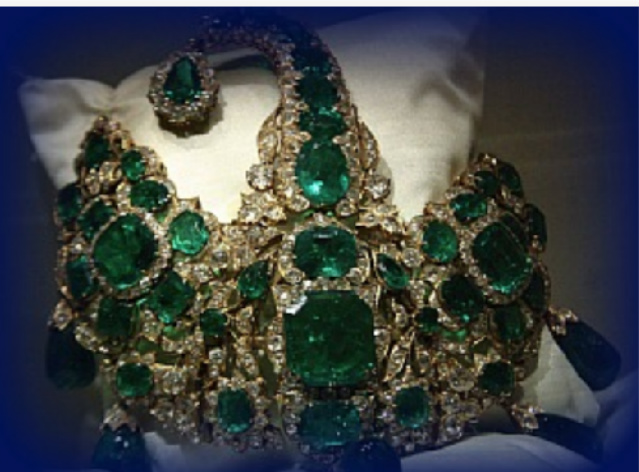 So what does it take to make famous collections, well...Famous?  After all, it's not that difficult to find a fashionable design or a gemstone ring with a perfect certificate.

Great collections in the History of Jewelry  share one common denominator. The collections are personal  and  deeply stirring.  Consider ex-President, Hosni Mubarak Egyptian Gift Collection.  The collection is deeply personal but will go  down in history as being  "famous" for all the wrong reasons.

Some of the most spectacular Jewelry Collections are found in  Incredible India. They were acquired by India's princes - The Maharajahs.....

And if you've ever wondered what is the difference between a Jewelry Collector and a Jewelry Investor,  find out Here...

God, according to Rudyard Kipling created the Maharajahs to offer mankind an incomparable spectacle - and what a spectacle it was! Although sport and sex were the preferred pastimes, Indian Gold jewelry, and Natural Pearls were the Maharajahs ultimate Prize. For example, The Maharajah of Baroda's court tunic was spun from gold in India, with only one family in his state allowed to weave its threads.

Among his most precious treasures were the famous collections of tapestries made entirely of Natural Pearls into which were woven ornate designs of rubies and emerald gemstones.

Jaipur's maharajah lorded over one of the largest and richest of India's princely states. Somewhere in the Jaigarh Fort, on a peak above the palace, the treasure of Indian jewels of the Jaipur princes lay buried, guarded by an especially belligerent Rajput tribe, the Minas.

Once per lifetime, each maharajah was allowed to visit the treasure and select a single item.  Man Singh chose, from the private treasure, a bird of solid gold studded with rubies of extraordinary fire, so heavy that a woman could hardly lift it. In a similar situ, the first Imperial Easter Egg by Carl Faberge, a tiny golden hen with ruby eyes  sat inside a small white enameled egg.

Independence came before the last maharajah, India’s most dashing prince, Man Singh II, (Jai Singh) the polo-playing Maharaja of Jaipur, known to everyone as “Jai” had time to choose his treasure.

However, Jai Singh didn't do too badly. One of the most famous collections in the world, the 'rocks of this Raj' included a triple-stringed necklace of incredible red spinel gemstones.  These red spinels had been contributed by various Mughal emperors, and were  each bigger than a pigeon's egg, along with three huge green emerald gemstones, the largest of which weighed 490 Cts!

It was inevitable that, with independence in 1947, and with the rise of the socialist Congress party, the world of extravagant excess should come to an end. Even India’s princes, who had negotiated with Mountbatten to keep their titles and income, were shocked at the speed of their loss of privileges.

Mrs. Gandhi declared war on them when she was prime minister, eventually stripping them of their state revenues in the 1970s. Even so, he didn't come off too badly. Among the world's greatest polo players, Jai Singh died in an appropriate form, atop his polo pony, one of the three richest men in England.

The Nizams' of Hyderbad Collection

One of the most famous collections of gemstones and jewelry was acquired by the Indian government in 1995.  These magnificent jewels once belonged to the Indian princes: the Narcissistic Nizams' of Hyderabad.  Presiding over one of the largest states (half the size of France), their dominion included Golconda.  In former times, Golconda was the world's diamond center.

The ornaments date from the early 18th century to the early 20th century.  Finely crafted from gold and silver and highlighted with exquisite enameling, the jewels are set with Colombian emerald gemstones, diamonds from Golconda mines, Burmese rubies and spinels and pearls from Basra and India.

Find out the meaning of gemstones here...

Though only a fraction of the legendary wealth of the Asaf Jah dynasty, the collection is breathtaking when translated into gem weight. There are 25,000 diamonds weighing in excess of 12,000 carats.  More than 2,000 emeralds were weighing over 10,000 carats and pearls exceeding 40,000 chows.

Not only did the Nizams love gemstones they also coveted titles. Among the titles of the seventh Nizam, Sir Osman Ali Khan Bahadur were included:  "Regulator of the Country, Victorious in Battle, the Aristotle of his Age, Shadow of God and Faithful Ally of the British."

While Osman Ali may not have been the world's richest man, he certainly qualified as the world's greatest miser.  His wealth included two lime-sized diamonds of over 180 carats each; among the diamond collection were the Nizam Diamond and the Jacob Diamond (100 carats) but in keeping with his frugal nature, one was used as a paperweight.

Amongst the Nizam's famous collections was a pearl collection, said to be so vast that it alone would cover the sidewalks of Piccadilly Circus, plus he owned over seventy million dollars in gold. But incredible as it sounds, despite his vast assets and famous collections of jewels, visitors to the palace would be presented with only one cup of tea, one biscuit, and one cigarette!

After his quests left,  Nizam Ali would drink any remaining tea, eat the crumbs leftover from the biscuits and smoke the cigarette butts to the end.  Over ten million dollars in cash was stashed in his basement, earning negative interest, as rats gnawed their way through thousands each year.

Diamond Collections & (it gets even more bizarre)...
Diamond Medicine

Diamond Medicine?! Unani medicine promoted good health through ingesting powdered gemstones. The Unani medical system has its roots in Ancient Greece; Hyderabad in India though was the only place in the world with free Unani medical clinics and a hospital devoted to Unani medicine.

According to India Astronomy, each gemstone should be carefully chosen  precisely to match the qualities of the person as each gemstone has special meanings.  "Indians are very superstitious about gems," explains Munnu Kasliwal. "If anyone buys a stolen stone or acquires it wrongly, it will curse them. We have a saying, ‘Someone who steals gems will lose their eyesight.’"

No Maharajah followed the Unani medical system better than one of the early Maharajahs of Mysore.  Informed that the finest aphrodisiacs contained crushed diamonds, he succeeded in quickly depleting the famous collections held in the state treasury in his princely quest for potency.

2. Munni Kasliwal of Gem Palace in Made for Maharajas, by Amin Jaffer, 2006, New Holland.

Return to the top of Famous Collections