An Introduction to Antique Jewelry Hallmarks 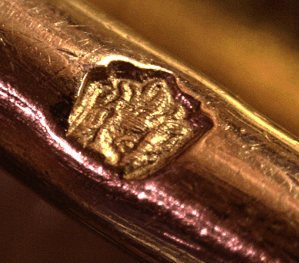 Is There a Hallmark Holmes in the House?

An introduction to Antique Jewelry Hallmarks  on Antique Gold Jewelry is base-camp in preparation for your Investing in Jewelry fun-journey.

Identifying marks  on Jewelry can be challenging for Anyone, not only the novice and that's the Exact reason I  created  the Hallmark Challenge for those elite group of Hallmark- Holmes Experts out there who like a dare.

If British Hallmarks is your area of interest, be sure to read (and bookmark) the Guide to Hallmarking in Great Britain...

There Are Three Basic Ways to Buy Gold Today That Investors Need To Know...

First tip - A magnifying glass or jewelry loupe is Vital to see the marking/s. This essential little tool makes a hallmark determination much easier and you will have a much better chance of success.

There are literally thousands upon thousands of different marks on jewelry from countries all over the world!

Today, when people talk about hallmarks, they could be referring to just about anything... from the Jewelry marks used to identify who made the piece, to the purity mark, the guarantee that the metal was made from high-quality metal to town marks, tax marks, country marks, etc. etc.

Strictly speaking, a Hallmakr refers to the metal content, it's the caratage or gold purity which may be in the form of the millesimal fineness, like "750" which may follow or proceed pictures, letters, numbers, stamps, initials, engravings.

Not surprisingly, gold investors who buy physical gold, like gold jewelry are often unsure if all these jewelry marks are really that important. Are British Hallmarks (UKHM) really the best in the world? British Hallmarks like Antique Jewelry has stood the test of time, and are trustworthy.

*** For a comprehensive look at British Gold Hallmarks, read  British Hallmarks on Gold, Silver, and Platinum, including Historic British Hallmarks ... (this page opens a new window - it's a pdf file and a bit slow to load but well worth the wait).

Hallmarking was originally introduced in 1300 in Great Britain by a Statute of Edward I and is one of the earliest forms of consumer protection.

Other countries, besides Great Britain, have Antique Jewelry Hallmarks. Around the former colonies of the British Empire, these marks are not seen so often.

And then we have desirable Antique French Jewelry bearing French Hallmarks. During the Louis era, the ram's head was in use in France from 1819 to 1838, when it was the Georgian era back in Britain.

Very early pieces  will not have any Antique Jewelry Hallmarks because hallmarking in the US only became as a legal requirement in 1906.

In the world of Antique Jewelry, import jewels are often NOT marked.

A Persian diadem, the ancestor of the tiara, was discovered made of brass metal, sometime between the 17th - 18th centuries and surprise, it sold at auction for 6,250 GBP.

Hand made Antique Indian Jewelry and old Ethnic Jewelry from the Arabian peninsula, are examples of premier antique jewelry bearing no such Jewelry hallmarks.

The point being, providing the Jewelry is authentic, early jewelry can be valuable although it will not be hallmarked. Indeed, some of the most unique and fascinating jewelry items were handcrafted by desert society people, who had either:

This does not mean these unmarked pieces are not investment-worthy or valuable. In fact, the opposite is true. The uniqueness of the design and the rarity factor override the need for jewelry markings.

A good question on the subject of gold jewelry with no visible markings was recently submitted to Help Central from India, about how to date Antique Gold Jewelry from India Not hallmarked. Read what Gem Palace replied to the gold testing lab question Here.

UKHMs have been around a long time. Striking a mark on British gold, originated in 1327 when King Edward III of England granted a charter to the Worshipful Company of Goldsmiths marking the beginning of the Company's formal existence.

Headquarters were at London's "Goldsmiths' Hall of the Worshipful Company of Goldsmith" and this is actually where the English term "Hallmark" was derived.

Antique Jewelry Hallmarks may well have been applied by a trusted party known as the 'Guardians of the Craft' back then, guaranteeing a certain purity or fineness of the metal, but unfortunately, that's not the case today.......

The guardians of the craft took their position seriously. Very seriously. Penalties for counterfeits were severe.

In 1397 a report was made on the false counterfeit stamps of two goldsmiths who were placed in the pillory at Westminster with their ears nailed to it and a ticket over their heads, on which their offenses were written. They each had one ear cut off. True!

Antique Jewelry Hallmarks include the Assay mark or quality mark that indicates the ‘Quality’ of the precious metal in the item. An assay office undertakes the job of testing all articles of silver, gold, and platinum, to ensure that they meet the minimum standard of purity.

The second stamp is the 'origin mark' or 'assay office' mark or ‘Mark of Origin’. The origin mark, simply tells you where the item was assayed.

The other most common Assay Office marks are from Birmingham (an Anchor). Once there were many Assay offices around Great Britain and Ireland, the Chester mark for instance. There are only three offices left in England now.

Sheffield assay office, is the last, using a 'Rose' origin mark - the rose, has an age-old symbolic meaning in the History of Jewelry. Often, a "flower" motif in connection with Jewelry had symbolic meanings, for instance, the Rose of Sheffield.

In puritan society people in love, harnessed the language of flowers to weave  meanings into Jewelry. When words fail us, Jewelry adopts  the role of cupid.

Find out about the sexuality of wedding rings...

If you have enjoyed this Introduction to Antique Jewelry Hallmarks, stay in touch, and consider Subscribing To My Newsletter Venus!

Return to the top of Antique Jewelry Hallmarks