Antique Cameo Jewelry Masterpiece
The Cameo Tour to Italy Form is on this Page! 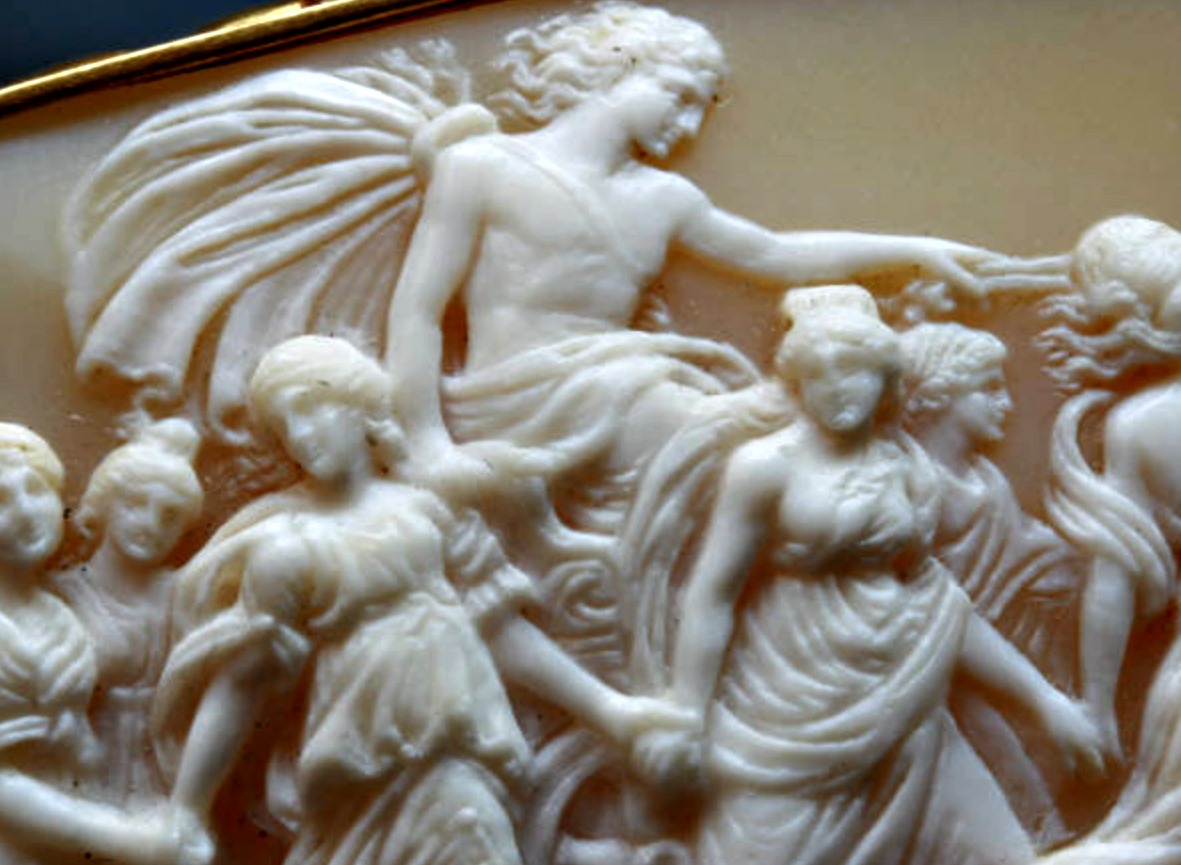 The subject  on the Italian Antique  Cameo  pictured above is  the sun God Apollo  seated on his chariot at the break of day, bringing the daylight into the world, rising with AURORA, the Ancient Greek goddess of the Dawn.

The scene on this cameo is a very  famous scene directly drawn from the pages of ancient Greek mythology. It  can be seen on the ceiling fresco  in the "Palazzo Pallavicini-Rospigliosi" in Rome, on the Quirinal Hill. This monumental work,  by Guido Reni, was completed in 1613-1614. It measures 280 cm (110 inch) x 700 cm (275 inch). The palace in which it is depicted was built by the Borghese family.  Information on FRENCH Antique Cameo Can Be Found Here...

Grande Cameo Travel to  Italy
DTBD
Love You to Join Us!

It's no surprise -  the finest  Cameo Jewelry is made  in one of the most magnificent countries in the world - yes, it's  Italy! There is so much to see and do in Italy! Jen has reviewed 100 top things  to do in Italy besides the Liverino Cameo Tour offered below.

The world center for Cameo Jewelry carving is  Basilio Liverino  Torre del Greco in Italy.  So I got to thinking...

........if I were new to investing in Cameo Jewelry I couldn't think of a nicer way  to get acquainted with Cameo than  from the historical masters of Cameo themselves. Much more fun  learning about Cameo in Italy than  reading more books or from behind a computer screen.

So, I decided to offer our guests an escorted   tour  of   the Cameo Jewelry capital of the world  - ITALY at a date to be decided.     Purchase Cameo Jewelry at discounted prices on tour,  immerse yourself in the sights and sounds  of incredible Italy while  learning all about Cameo Jewelry from the masters of antique Cameo themselves and  not to mention the fun you will have  visiting Italy with like-minded people from around the world.

Our Cameo travel to Italy tour will take in many of the sights and sounds of Naples, and you will see Cameo Jewelry being carved by the Italian masters  themselves just like the Victorians  did when they traveled on the grand tour  over 100 years ago!  Return with a deeper understanding and appreciation of cameo art and gain greater knowledge about Cameo Jewelry,  than many of the cameo experts.  There is nothing that compares to first-hand, working knowledge and  experience.   You will also have the chance to invest in Cameo Jewelry  in Italy and receive  helpful  guidance (which could save you the cost of the tour) from  Cameo  and Jewelry experts.

So, what are you waiting for?   Join  us, for  learning, laughter, buying  &  fun,  meet new friends  in real life who share your love of Cameo Jewelry,  Italian art, and culture.   Even if you know nothing about Cameo Jewelry but  would like to learn, I can't think of a better way to start a Cameo Jewelry love affair than joining us on this tour.

A tour of the famous Liverino Museum of Cameo & Coral Jewelry is not to be missed and  included!

If you would like to join us on  the  Antique Jewelry Investor  grande cameo tour  to  Italy (post-pandemic) fill  out the form below and express your interest.

We  will get back to you within 48 hours with  further details and prices.

Don't miss out! Join us on a Cameo Tour of a Lifetime to Italy - WHEN? Post Pandemic - TBD

What Is An Antique Cameo?

Technically,  the cameo both modern and antique, is a carving made from a single piece of hard-stone, coral  or shell material.  If the carving was created over one hundred years ago, it  is officially described as an antique cameo. Cameo over a century old  contain two other important  qualities not found in its modern day cameo sister;  Rarity and Age Appeal.

When a carving is successful, you will not be aware that color has been used deliberately to make the carving pleasing to the eye. Only after examining the composition of a cameo carving is the adroit use of color recognized as a primary reason, that the work of art is so satisfying.

An oval white background can form a background for the design of the cameo, which may be a reddish color for example, of shell or carnelian.

Classic Old Cameos often reveal scenes of classical history, depicted in the form of classical mythology. One of the most famous Cameos in retrospective time, according to the History of Cameo is the legendary - TAZZA FARNESE.

This famous cameo of antiquity can trace it's origins all the way back to 31 BC! The reason that the Tazza Farnese can do this, is because of the material it was carved from - Sard Onyx, a semi-precious stone and relatively hard in comparison on the Mohs Scale.

The popularity of French and Italian Cameo Jewelry is not only due to their incomparable beauty and fine craftsmanship but also the fascinating Ancient Greek mythology that provides the inspiration behind many of the meticulously carved scenes.

Return to the top of Antique Cameo