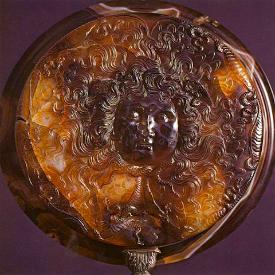 In the history of cameo carving, ancient Greek cameos are pure evocation; just look at the Medusa's Gaze on the Tazza Farness Cameo above, and you'll  get the idea.

Fine, mythological Antique CAMEO are precision carved representational works of art, and capture in fine details and masterful craftsmanship some of the most inspiring Greeks myths from the days of yore.

The Ancient Greeks were the great myth-makers of Europe, producing a pantheon of allegorical literature known as Ancient Greek mythology; collections of amazing stories told about gods, heroes, men & women of long ago evocative of the ideal.

One of the most famous and important cameo in the history of cameo is the Farnese Cup; the largest existing cameo in the world! This antique cameo takes its name from the last collection to which it belonged before becoming the property of the museum, Museo Archeologico Nazionale di Napoli.

Cameo history records that Lorenzo 'The Magnificent' (who obviously wasn't shy) once owned this cameo beauty or cameo ugly, depending on which way you look at it, and considered it to be the most rare and important object in his collection - The Tazza Farnese Cup.

History of Cameo Goes Back To Ancient Egypt

Stylistic analysis of one of the most celebrated cameo in existence, Tazza Farnese Cup, in four-layered Sardonyx Agate can trace its' idealized form back earlier even still to the ancient treasure pond of Ancient Egypt - 31 BC.

The reason this famous cameo can trace its history back this far is largely due to the material the master-engraver chose to use. Sardonyx Agate is relatively hard on the Mohs Scale, which means the gemstone material is durable and long lasting  and the fact that this cameo is still around for us to see with our own eyes today attests to this.

After Octavian's conquest of Egypt in 31 BC, the Farnese Cup was acquired by the Treasury of Rome, when sea gods were at the height of mythological fashion among the emperors of Rome.

Beneath the turquoise waters of the Blue Grotto on the island of Capri in southern Italy, according to a recent underwater survey of the sea cave, lie Roman statues of sea gods, dating to the 1st century A.D. The Blue Grotto was used as a swimming pool by the Emperor Tiberius (42 B.C. - 37 A.D.), and the statues are probably depictions of sea gods that surrounded the Emperor's luxurious natural swimming pool.

Fast forward to Lorenzo, the Magnificent, who purchased this famous "scutella di calcedonio" in Rome, in 1471. From there it came into the possession of the Farnese family, and today is conserved in the Naples National Archaeological Museum.

The association between the serene depiction on the obverse and the terrifying image of the Medusa, also attributed to ancient Greek mythology, that appears on the reverse has been interpreted as a reference to the royal family who can govern peacefully but also can adopt an uncompromising approach when necessary.

From Ancient Egyptian cameo art to the contemporary Antique Cameo jewelry of today is the consistent desire, on the part of the artist to attain perfection in the recreation of the smallest details in miniature, on a three-dimensional surface.

In comparatively recent European history, Cameos was popularly used in Georgian Jewelry. The early Georgian period of jewelry and the reign of King George 1st, 1714 to 1727, saw the French influence become predominant and continue into the early 1900s.

In the late 1800s, Josephine Bonaparte's love for Italian Cameo brought them back into favor. Antique cameo brooches and cameo earrings were popular during this period. The British influence was also strong, and beginning around the mid-1800's, English Wedgewood cameos became very desirable.

Many people think that the history of cameo making began in Italy and Greece.  However the history of Cameo goes back much  further than the Middle ages with its roots over yonder in Ancient Egypt.

Return to the top of History of Cameo