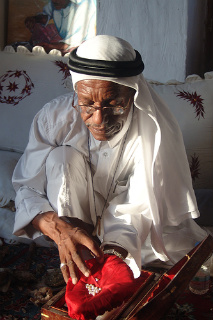 Persian Gulf Pearls In the Red

The Persian/Arabian Gulf is renowned for its  Natural Pearls.  Famous since Biblical times for its Pearls; Bahrain with its vast oyster beds was referred  by the Greeks as   "Tylos". It was  the center of the Pearl trading when Nearchus came to discover it serving under Alexander the Great.  In the past Bahraini Pearl merchants such as Sa'ad Ismael would have been able to spot a Natural Pearl just by looking at it, today's market is far more complex.

Making the distinction is no small issue in Bahrain, where it is forbidden to trade in Cultured Pearls.

The Iranians  call it the "Persian Gulf" and the Arabs, call it the  "Arabic Gulf". This strategic stretch of water is located in Western Asia between Iran in the north-east and the Arabian Peninsula to the south-west.

As far as the Bahrain Natural Pearl is concerned, the Persian Gulf is pearl paradise.  Nowhere else did pearl oyster grow Pearl more plentiful, of such high quality, radiance, and size, as the Persian Gulf waters near the strategic Straits of Hormuz.

Pearl divers were able to dive often in the warm shallow waters of the Persian Gulf, sprinkled with its many freshwater springs.  This unique mix of fresh and saltwater that surrounds Bahrain is one of the secrets behind the special luster and brilliance of the Arabian-Persian Gulf Pearls. When two oceans meet, the most beautiful Natural Pearls are born.

In the history of the Gulf Pearl trade,  the pearls from the Gulf were first sent from Bahrain to Bombay, which was the chief trading center  and  administered in 1910 by two Arab dealers, Abdul Rahman and Sheikh Jassim. On account of their status in the pearl trade, these  two Arab pearl dealers where regularly courted by Cartier and Rosenthal. (see reference below on this page)

From  east to the west, royalty, celebrities, Indian princes,  famous Hollywood actresses, like Elizabeth Taylor (remember  La Peregrina Pearl, who could forget!) and couples in love, have fallen under the magic of Pearls.

Famous Collections from around the world often contain Natural Pearls.

For example,  look at The Jewelry of Umm Khalthum (Umm Kulthoum) (1904-1975) the beloved singer of the Arabic world. Her India-style Pearl necklace (above image) sold on the 29th April 2008, for $1.4 million - ten times its' original value. The pearl necklace was a gift from Sheik Zaid ben Sultan, founder of the United Arab Emirates.

Natural Pearls are formed without  outside interference from man. Discover how to identify Natural Pearls from Cultured Pearls by diving in Here...

Read about Large Pearls:  Three of the world's largest Natural Saltwater Pearls are the 'Pearl of Allah',  the 'Arco Valley Pearl' and the Giant Dubai Natural Pearl -  the world's  three pearl monsters.