The Duchess of Windsor Collection 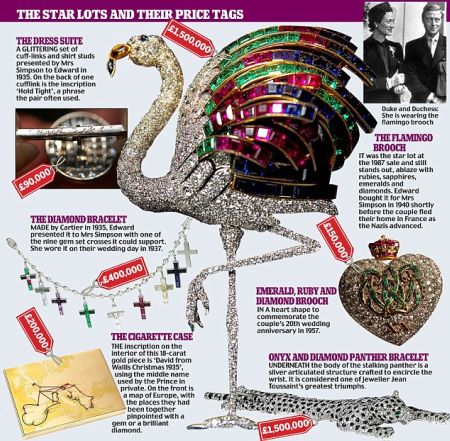 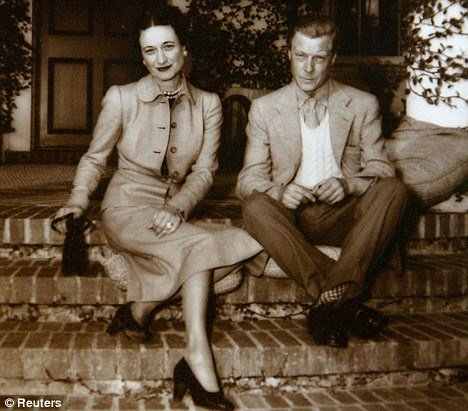 The Duchess of Windsor Collection reached the highest world record for a single-owner Jewelry sale ever conducted.  This royal assemblage on the List of Famous Collections was originally sold in 1987, by Sotheby's in Geneva for the record price of $53.5 million. The Wallis Simpson Jewelry Collection consisted of 214 pieces.

The Duchess of Windsor Jewels were unique, not only because of  the record price they fetched  but also due to the fact that these pieces immortalise the most controversial love story of modern times. The Jewels that comprise of the Duchess of Windsor Collection, which King Edward VIII of the British Royal Family, lavished on Wallis Warfield Simpson were only part of the love story though.

View the Catalogue of the Jewels and precious objects formerly belonging to the Duchess of Windsor presented by Sotheby's Here...

The couple marked the milestones of their romance and 20 years of their marriage with exquisite Jewelry keepsakes.

The Cartier Jewelry from the Wallis Simpson and King Edward VIII collection were again sold by Sotheby's at auction in November 2010. Among the pieces in the Duchess of Windsor collection that were auctioned,  was the Cartier Diamond Bracelet. The Duchess wore the Bracelet on her wedding day.

The Duchess of Windsor collection record the Wallis and Edward (WE) love story in a most personal way.  The Sotheby's auction  of the Jewels in 1987 set international society and the press agog.

For the Love of Wallis Simpson 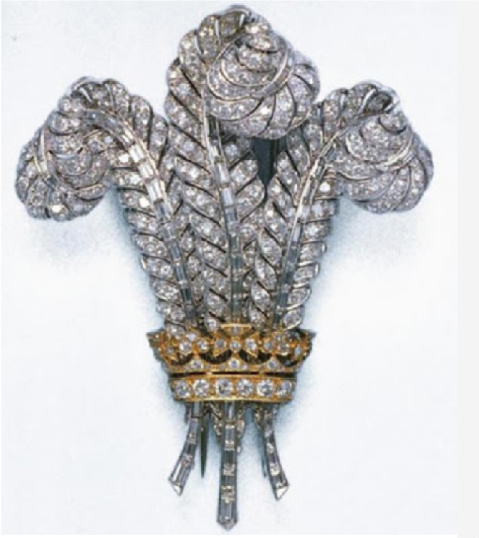 Even celebrity couples in love were no match for this royal couple in love. They married in a private ceremony  on 3 June 1937, at Chateau de Candé in France; the marriage changed the course of modern history.

Edward VIII showered the love of his life,  throughout their marriage with the finest Jewels. Indeed, so obsessed was King Edward VIII of Wallis,  he insisted the Duchess of Windsor's collection of jewels be dismantled after her death. Edward VIII was determined  that no other woman beside Wallis  would ever wear them.

But, the King of England who became the Duke of Windsor in 1936 when he abdicated the throne in shame to marry Wallis Simpson, an American divorcee, was not to have his way......

Around 1,000 bidders crowded into a huge tent erected by Sotheby's next to Lake Geneva for the two-day sale. In Sotheby's New York, another 600 people were in the main salesroom to view slides of the Duchess of Windsor Jewels and to have their bids relayed to Geneva.

The Jewel that commanded the highest price reached  £2m ($3.15m) was  a 31-carat diamond ring by a Japanese jeweller.

The Three Ostrich Plume Diamond Brooch was designed in 1935, by Edward (who was at the time, the  Prince of Wales) for his future bride, before the wedding in 1937. It  was sold by Sotheby's to the late  Elizabeth Taylor.

The American famous actress, Elizabeth Taylor, was also an avid Jewelry Collector  and a close friend of the Duke and Duchess of Windsor.  She purchased  the antique diamond ostrich plume brooch (image above) as she openly  admired it when Wallis Simpson wore it, and bought it mainly for sentimental reasons.

Another famous Jewel in the collection was a sapphire pendant that was rumoured to have been bought on behalf of fellow British actress and celebrity, Joan Collins. Sapphires were the Duchess of Windsor's Favourite Gemstone; Wallis thought the colour of blue sapphires brought out the colour of her eyes, and they probably did!

The Duchess was also a lover of Natural Pearls. A magnificent strand of Natural pearls, formerly of the collection of the Duchess of Windsor was bought  at the Geneva auction in1987 by Kelly and Calvin Klein for $3,00,700. They sold the  Natural Pearl necklace twenty years later for $3,625,000.  According to New York Sotheby's Jewelry expert, Catherine Becket,  Queen Mary handed the Pearls down to her son - Edward VIII, bequeathing the accidents of mother-nature to Wallis Simpson, as her way of reconciliation, "perhaps, not of approval, but a sort of approval of Wallis," adds Becket. (see reference 4)

The Duchess of Windsor  on occasion would wear American costume designer Jewelry, including Miriam Haskell Jewelry. Designer costume Jewelry was not only worn by royalty, but also by many of the rich and famous movie stars of the time, such as Joan Crawford, Lucille Ball, and Gloria Vanderbilt.

The Big Cats
The Duchess of Windsor Collection 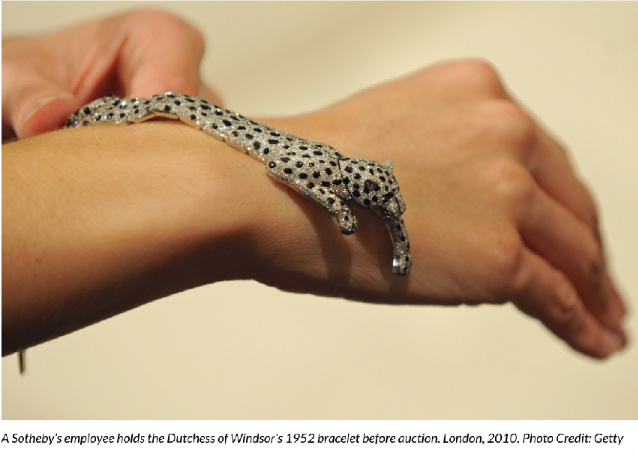 Among the Duchess of Windsor Collection of jewelry gifts, Edward lavished on Wallis Simpson was the signature 'Great Cats' commissioned from the House of Cartier.

It was the famous Panther Bracelet that enjoyed  pride of place among Wallis Simpson's Big  Cat Jewelry Collection.

It was purchased for the permanent collection of The Franklin Mint at the Sotheby’s Auction on April 2-3, 1987, in Geneva Switzerland. Twenty-three years later the Panther Bracelet  was sold at auction for $7.4 million in 2010. 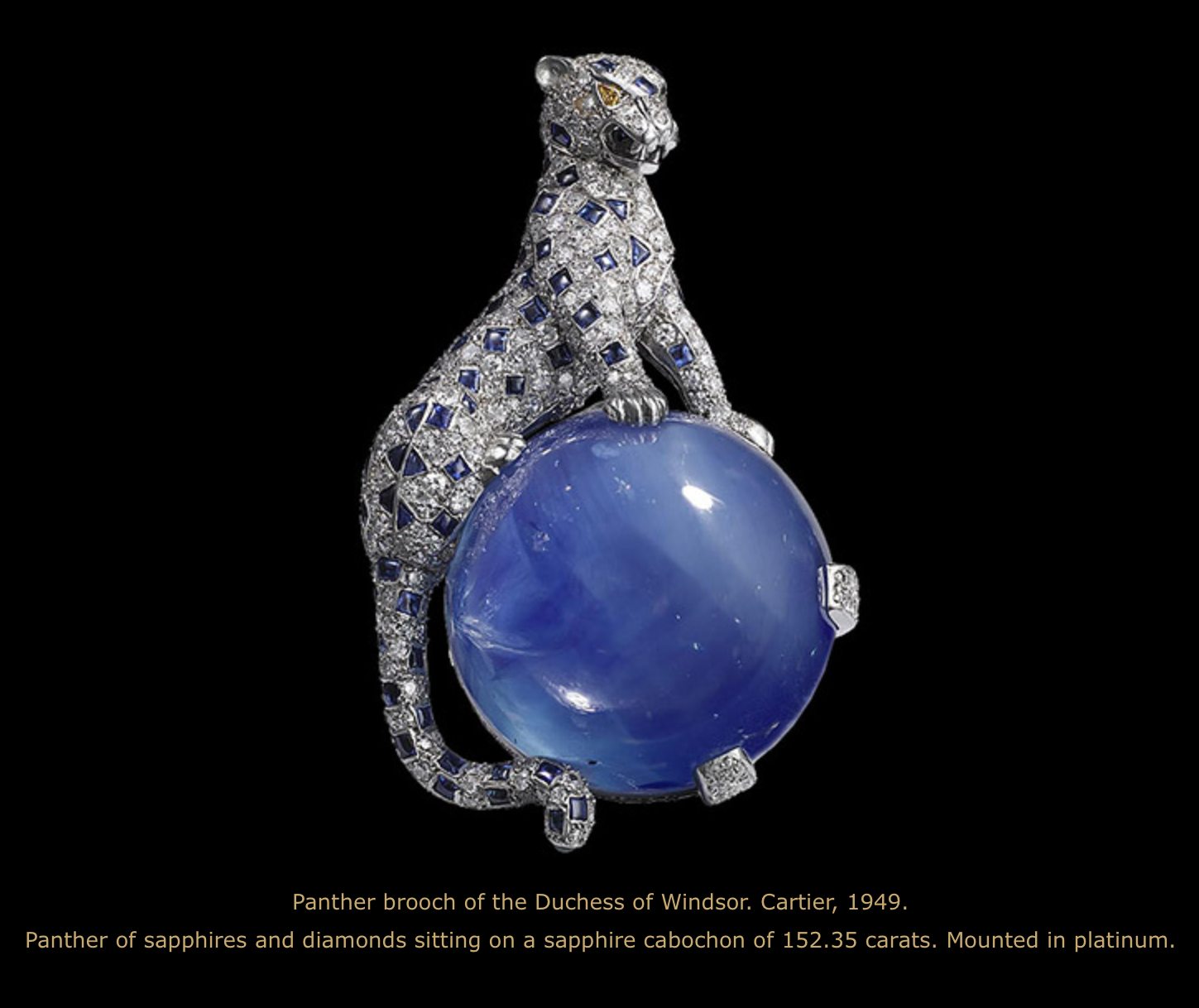 Another big cat, (bedsides the King;-) The Duchess of Windsor acquired was the Diamond and Sapphire Panther Brooch made by Cartier in 1949.

The big cat on this pin appears crouching in a lifelike pose, ready to leap over the moon; on a large perfectly round cabochon star sapphire weighing 157.35 carats. The Panther Brooch was one of Wallis Simpson's favorite pieces.

Jewelry often speaks when words fail us. The Leopard is a member of the genus - Panthera - the Great Cats. One definition of "big cat" which includes the four members of genus Panthera: the tiger, lion, jaguar, and leopard, the commonality in this genus is that they are the only cats able to roar, rather than purr.

The Leopard's Head has been the London Town mark, (crowned & uncrowned) from 1478 to the present. The lion has been a symbol of the King of England, i.e., Lion-Hearted King of England. It is also the national animal of England and has been associated with English royalty for hundreds of years.

On the other hand, "Great Cats" have not played any major role in  the History of Jewelry  until Wallis Simpson pride of big cat jewelry strode onto the scene. Her 'big cats' started a jewelry fashion trend for feline bijou that has never lost its appeal.

There are seven members in the big-cat family: lion, jaguar, tiger, leopard, snow leopard, mainland clouded leopard, and the Sunda clouded leopard. All them under threat from habitat loss, poaching and human wildlife conflict.

The one common trait, apart from their great size, Lest We Forget, is the big-cat's loud and  frightening roar.  After-all, the Big cat is not labelled "King of the Jungle" for nothing. Were the Great Cats, Edward placed in the hands of the lady he adored,  a powerful yet silent trumpet blast, in forever abiding Jewelry,  that declared, Edward, whatever, was a King?

Have You seen the Jewel of the Month Yet? Click Here...

Return to the top of The Duchess of Windsor Collection