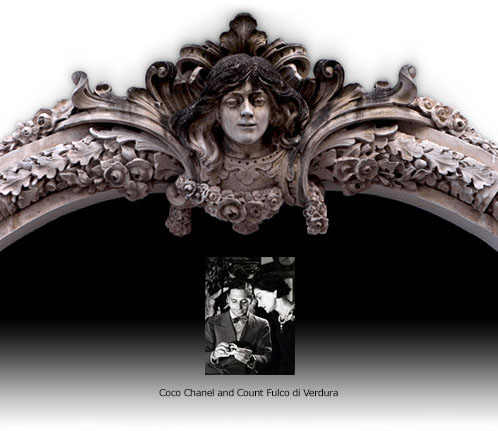 Before Chanel resuscitated "black" into life, the color black  had only ever been associated with mourning Jewelry.  Like her,  or loathe her, Coco Chanel, more than any other designer of her time was a real Natural Pearl Connoisseur.

By pearl connoisseur,  what I mean is this,  Chanel  understood what was truly unique and had lasting quality, she was not influenced by most  people's ideas or  their technical standards.   She had a special gift for "knowing" not only what worked in contemporary fashion, but also what "style" would have lasting quality.

Lasting quality is often overlooked when new to collecting Vintage and  Designer Costume Jewelry.   It's vital. Successfully  identifying an  elusive quality called  "lastingness"  is developed through experience in the trade together with the raw power of oldness.

Chanel Costume Jewelry is treasured by Chanel Jewelry Investors. Her designs challenged the conventions of the day, dispensing with the ice floe of conventional Jewelry, Coco plunged ever deeper below its surface. By combining genuine and fake; evening Jewelry with daytime clothes, a new state of thinking evolved.

The craze for costume Jewelry and a long pearl necklace started during the decadent days of the "all-that-jazz" era. Chanel took Jewelry that was previously meant only to be imitations of actual jewels and re-arranged the Jewelry and the concept, exaggerating these pieces so that they would never be mistaken for fine Jewelry.

Fine Art Deco Jewelry was a major influence of faux costume Jewelry under Chanel.  By the late 1920s the fashionable handcrafted Jewelry boxes of fashionable women  contained both fine  and faux Jewelry. The richness of color and the size of these faux creations grew into exaggerated sculptural forms of astonishing beauty.

Chanel  "imitations"  though were anything but mere "copies".  They were worn outrageously, such as when flappers looped long strands of oversized pearl necklaces around their waif-like figures.

Costume Jewelry, such as Chanel costume Jewelry became a seedbed for design ideas, that looks as fresh today, as when it was first created.  From Coco Chanel in the 1920s to Yves Saint Laurent in the 1970s to Lanvin of today, Haute Couture costume Jewelry has been an eye-catching accessory to enhance a designer's view of fashion.

From 1929 to 1937,  Chanel met  with Count Fulco di Verdura (not Vendura)   and sparks began to fly -  he  launched a series of extraordinary designs in "rococo" and "baroque" styles that included her now signature Maltese Cross Cuffs set with multi-colored cabochons in white enamel. These cuff bracelets are now considered  Chanel costume Jewelry book pieces and the hallmark of the Verdura brand; they have been copied many times over the years.

Fulco Santostefano della Cerda designed many of her finest pieces from the mid-1920s to 1934 - the  Duke of Verdura (1895-1978).  The Count's eccentric life in Sicily provided a wonderful source of inspiration. Count Verdura was also a source of inspiration for the renowned - Miriam Haskell.

Chanel loved "fallalery, fakes and imitations" which included, gold-toned chains, and "poured glass" Jewelry by Maison Grioix. Baroque pearls, often feature on many of the historically inspired Chanel Costume Jewelry pieces, such as her Byzantine and Renaissance style crosses, earrings and, pearls - faux pearls, not to be confused with Saltwater Cultured Pearls.

The genius of Chanel is that she managed to incorporate Costume Jewelry into her haute  fashion philosophy.

The new glamorous fashion jewelry was designed to complement the clothing worn on the runway and for photoshoots. At a time when fine jewelry defined a woman's status in society, Chanel removed the seriousness and daringly mixed it with pieces that were - fake. "Jewelry isn't meant to make you look rich," said Chanel, "it's meant to adorn you."

Chanel often copied her favorite fine-jewelry pieces which included colorful renaissance-inspired designs. These were presented to her by her two most important lovers: the polo-playing English diplomat, Arthur Boy Capel,  one of her first investors, and the extremely wealthy, "Bend'or" the Duke of Westminster.

Arguably the most visible female personality of her era, Gabrielle Chanel invented a style synonymous with modernity.

And here's an interesting fact you won't find  anywhere else, (unless I've been copied again;-)  Chanel also worked with genuine Natural Diamonds,   designing  an  exceptional collection of the finest Diamond Jewelry  for Debeers,  that was Anything but Costume.

Return to the top of Chanel Costume Jewelry