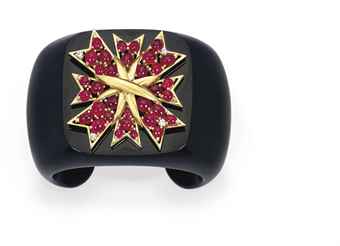 In 1934, a year after opening a workshop in New York City, Verdura crafted a cuff bracelet  themed around a Maltese Cross. It was given to Chanel by Grand Duke Dmitri of Russia.

The Maltese Cross became one of Verdura’s most celebrated bracelets and helped to propel Verdura into the spotlight. By the late 1930s, Hollywood starlets, including Katherine Hepburn and Greta Garbo, as well as aristocrats, such as the Duchess of Windsor and Countess Mona Von Bismarck, amongst many others were clamoring for his jewelry.

June Jewel of the Month 2011 - Verdura Cuff - boasts a sculpted gold Maltese Cross at center stage, set with cabochon rubies and circular-cut diamonds, mounted in gold, and measures 2¼ ins. in diameter and is 2 ins. wide. The cuff is signed Verdura - the Duke has been referred to (New York Times) as the elegant beguiler of the stars.

The Maltese cross was a popular motif in England in the 19th century. Brooches and pendants were also made in the shape of the Maltese Cross and lavishly embellished with diamonds and rubies in Pave Settings.

It was named after the white cross worn as an emblem on the robes of the Nights Templar, a religious order that was established in the 11th century to care for pilgrims to the Holy Land of Jerusalem. It is sometimes referred to as the Cross of St John.

Read about a girl with a pearl earring in Jerusalem...

Return to the top of June Jewel of the Month 2011