August Jewel of the Month 2010 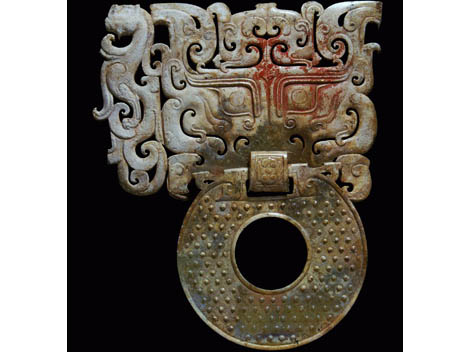 August Jewel of the Month 2010 is made of Jade gemstone and comes all the way from Antiquity. Jade and Natural Pearls are known as ornamentals and like Amber gemstone these biological gems grow more intriguing with their age.

Carl Fabérgé was an admirer of the green ornamentals, my favorite Faberge egg is made of siberian nephrite jade... Do you have a Favorite Faberge Egg? See the Full Catalog of Faberge Russian Eggs Here.....

August Jewel of the Month 2010 is a large ancient circular ornament pendant from Nanyue King's Tomb in China, and was only discovered in 1983! Notice the green color and staining of the Jade. The surface features of gemstones often indicates age and variety.

The tomb is situated on Xianggang Mountain to the west of Yuexiushan Park in Guangzhou, and Nanyue King's tomb is the earliest large-scale tomb with its color paintings that appear in its seven stone chambers which are hidden twenty meters below the top of the Xianggang Mountain.

The occupant of the tomb was King Zhao Mo who was the second Nanyue King and the grandson of Zhao Tuo, the founding father of the Nanyue Kingdom. The body of Zhao Mo was wearing a jade burial suit knitted with silk threads. A total of 15 people were buried alive with him and there were over 1,000 precious burial objects, most of which were Bronze and Jade articles.

The discovery of Nanyue King's tomb provided invaluable information for the study of the history and the fusion of the Han dynasty and Yue ethnic cultures in the Lingnan Area of the Qin and Han Dynasty. After the discovery, the tomb was protected on the spot and a 14,000-square meter museum featuring artifacts from Han Nanyue King's tomb was built beside the site.

August Jewel of the Month 2010, the ornament you see in the above image is indeed of Jade. This stone is usually a light green color with white markings but Jade ranges in color from an emerald green color to a wide variety of colors in between.

Varieties of Jade, Jadeite and Nephrite have long been used in the Far East for weapons , ornaments and especially Jadeite for jewelry, finger rings, beads, bracelets, belt hooks, girdle ornaments, hair ornaments and combs. In China, Jade was regarded as equal to, if not superior, to gemstones.

Jade has been imitated in both glass and plastic but the stone is easily distinguishable. It has also been dyed to improve its color or to simulate antiquity, but the organic dye does not penetrate and the color soon fades.

Have you read about the Medieval Austrian Treasure discovered in the backyard?

Return to the top of August Jewel of the Month 2010