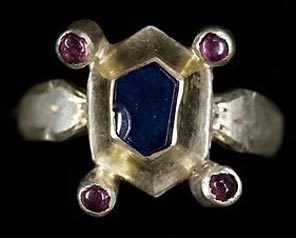 Austria is better known for its Rhinestones so when an Austrian buried treasure that included, hundreds of pieces of centuries-old jewelry and other precious objects, was reported in a breaking news story by CBS on 22nd April 2011, it was quite sensational.  Austrian authorities have described as "a fairy-tale find" that has  been discovered by a man while digging in his back yard in Austria, and not treasure hunting as one would expect. The man was attempting to expand his garden pond!

Mr.  Andreas K. from Wiener Neustadt, south of Vienna, who discovered the artifacts from the middle-ages, has unknowingly expanded the medieval treasure pond in the process.

Natural Pearls Were Among the Austrian Buried Treasure

The Austrian department in charge of national antiquities said the trove consists of more than 200 rings, brooches, ornate belt buckles, gold-plated silver plates, and other pieces or fragments, many encrusted with Natural Pearls, fossilized coral and other ornaments. The objects among the buried medieval treasure are believed to be around 650 years old, dating to approximately the 14th century and are being evaluated for their provenance and worth.

Mr.  Andreas K. found the ornaments originally in 2007, although according to the news story, Mr. Andreas K. did not report the findings to the memorials office until after rediscovering the dirt-encrusted objects in a basement box while packing up after selling his house two years ago, said Profil. It was then revealed after the soil had dried and some dirt had fallen off, the treasure trove of  jewels underneath.

Although we know they were made 650 years ago, there is no way of knowing when they were buried. were family heirlooms buried more recently? The dig site could not be analyzed to determine the age of the disturbance  because the discovery was not reported to the authorities when it was first found. Unfortunately, because Mr A. washed the artifacts, any information in the dirt they were buried in cannot be determined.

It's anyone's guess. Keepsakes buried during WWII?  A museum was looted and the artifacts  buried in the 19th century? One person has suggested on the democratic underground forum that it could have been buried by a local noble during the 30 Years War or even hidden during one of the several attempts by the Ottomans to take over the area. Any of these possibilities are theoretically possible.

The proper excavation of a discovery site is often more important to understanding an archaeological discovery than the items recovered because they put the discovery in context.

It seems Mr A.  excavated the entire site for his pond, and so the length of time the artifacts had been buried in the ground will never be known. How disappointing! If only this Austrian buried treasure could speak!

Reminds me of Michelangelo who also knew what disappointment meant in life. In  the year 1545, the great Italian sculptor, painter, architect, poet and engineer of the High Renaissance, Michelangelo (1475 - 1564) finally completed the long commission and biggest disappointment of his life:  the statue of Moses.   After 45 years of constant  interruptions, Michelangelo finally completed it. The figure of Moses appeared so life-like to  Michaelangelo,  he stood back from his work and commanded  the statue of Moses to "Speak Now!"

We look forward to furthering updates on the Austrian department's evaluations and findings.

Another fascinating Ancient true fairy-tale jewelry find:  A Girl in Old Jerusalem Who Wore A Natural Pearl Earring - Read About It Here...

Return to the top of Austrian Buried Treasure

Return to the Medieval Treasure Pond