October Jewel of the Month 2011 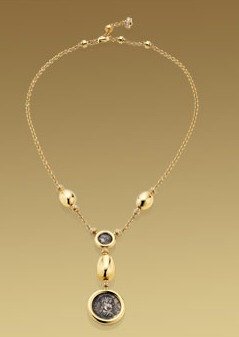 For October Jewel of the Month 2011, Antique Jewelry Investors with an eye for Roman- inspired Antique Coin Jewelry will discover a surprise in Bulgari's latest MEDITERRANEAN EDEN Collection in the form of an Antique Coin Necklace in 18- carat yellow gold. Bulgari, are renowned for their distinctive designs and their creative ability to combine classic, antique style with contemporary flair and one of the few luxury jewelry manufacturers that have been in business since the nineteenth century.

The brand quickly established a reputation for Italian excellence with exquisite craftsmanship and magnificent jewelry creations. Over the decades, the Bulfari generations defined a distinctive style made of vibrant color combinations, exquisitely balanced volumes and unmistable motifs that pay homage to the Roamn roots of the company.

Bulgari pride itself on its ethical commitment and takes the issue of conflict diamonds also known as Blood Diamonds very seriously, actively cooperating with its suppliers to prevent conflict diamonds from becoming part of their inventory.

Modern jewelers often use a variety of new forms and exotic combinations of gold and other metals. With concerns over the environment, responsible jewelers such as Bulgari, advocate and encourage the use of recycled gold or the use of more environmentally- conscious "green" gold;  that is gold recovered using less destructive and toxic gold mining methods.

Return to the top of October Jewel of the Month 2011