August Jewel of the Month 2011

Bird on a Rock Jewel 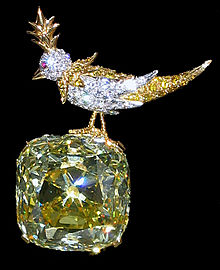 Bird on a Rock Yellow Diamond

Thirty lavish Jewels of  Tiffany's renowned jewelry designer, Jean Schlumberger (1907 -1987) are presently on exhibition at the Virginia Museum of Fine Arts from July 30, 2011 - November 2011. "Bird on a Rock" - one of Jean's (and one of the world's) most fantastical pieces, is not among the exhibit at VMFA, so I decided to showcase this amazing piece by Jean Schlumberger on August Jewel-of-the-Month 2011!

The famous Tiffany Diamond is a canary yellow diamond (the largest known of such color) weighing 128.51 carats and cut from a rough diamond weighing 287.42 carats said to be found in 1877 in the Kimberley Mine in South Africa.

The diamond was immediately purchased by Tiffany & Co., New York which has had it displayed at several exhibitions and on a continual basis at its shop in New York City. In 2012, the iconic yellow diamond was set in a spectacular diamond and platinum necklace. Some say this yellow diamond could be the most important diamond in the world!  It honors the founder, Charles Lewis Tiffany whose acquisition of the stone catapulted Tiffany's diamond heritage into worldwide fame.

The intense  fancy colored Diamond is a cushion-shape brilliant and was cut in Paris with 90 facets, having 40 facets on the crown, 48 on the Pavilion, a Table, and a Culet. The 32 facets more than the standard BRILLIANT is what gives the Tiffany diamond its extraordinary Brilliance and Fire.

The diamond is reported to have been worn by only two women during its entire lifetime. It was first worn by Mrs. Sheldon Whitehouse at the 1957 Tiffany Ball held in Newport, Rhode Island set in a necklace of white diamonds and by Audrey Hepburn in 1961 publicity photographs for Breakfast at Tiffany's. The 2011 Bird on a Rock setting  was designed in the 1960's by Jean Schlumberger. Jean was engaged as a special designer of jewelry at Tiffany & Co., New York in 1956 and given his own studio.

The “Bird on a Rock” clip of platinum with touches of gold setting designed by Jean is both quirky and fantastically splendid.  A small jewel-encrusted bird perches atop the magnificent Tiffany Diamond. Although the Tiffany Diamond is estimated to be one of the most valuable gems in the world, it is free for anyone to look at as they stroll down Fifth Avenue in New York, New York.

Gold and silver, as the principle monetary metals, as well as platinum and palladium (secondary monetary metals) will be part of the formula that determines the fair value of any future global currency.

Feature Your Jewel on Antique Jewelry Investor - "Jewel of the Month"...

Return to the top of August Jewel of the Month 2011