Unlike Lady Diana, who chose a blue sapphire,  Camilla Duchess of Cornwall, accepted  a diamond  engagement ring from the Prince of Wales set with classic white antique diamonds that sparkle blood-free. The Duchess, on certain occasions, for example, at the Royal Ascot procession in 2009, also looks glamorous wearing Natural Pearls. 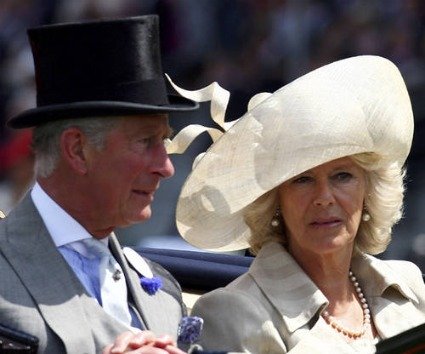 A favorite of the Queen Mother, the 1930's Art Deco engagement ring was reset to fit Camilla's wedding ring finger. More beautiful than the day itself, the diamond gemstones are linear perfection. 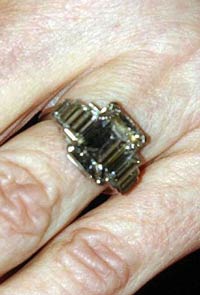 Read the Facts About Diamonds!

The Antique Diamond at centre stage, of the Royal Duchess Camilla's engagement ring, is so clear, it's mirror-like surface appears to reflect the happiness that's written all over the face of this strong woman.

The platinum engagement ring is a royal heirloom and is comprised of one emerald cut diamond alongside which are three diamond baguettes.

Wartski Welsh Gold For The Duchess of Cornwall

In keeping with British Royal Family tradition, the Royal Couple's Wedding Rings were both crafted from gold from the Clogau St David’s mine in Bontddu, North Wales.

Previous royal wedding ring sets have been made from 22 karat gold from the same mine. Some indeed from the very same nugget of gold! In keeping with tradition, from 1576 - 1798 only the highest carat gold (22 carats) was used.

Catherine Middleton who now has the title of Her Royal Highness The Duchess of Cambridge upon her marriage to Prince William wears a wedding ring designed and made by Wartski, a family-owned firm of antique dealers.  The ring was fashioned from a nugget of Welsh gold from St David's mine in North Wales and was given to Prince William by The Queen shortly after the engagement was announced.

Over the past century, most royal brides have opted for the same wedding ring - a simple band made from Welsh gold. Elizabeth, The Queen Mother started the tradition after commissioning her wedding ring to be crafted out of a lump of pure Clogau Welsh gold which had belonged to the monarchy for more than a century. Queen Elizabeth herself followed suit and so have most royal brides in recent history, including Meghan Markle, who adhered to this tradition when she wed Prince Harry in 2018, and Princess Beatrice's younger sister, Princess Eugenie.

Wartski has a history with the Royal Family. Not only did Wartski fashion The Duchess of Cambridge's wedding ring, the firm supplied the engagement and wedding rings to Queen Elizabeth’s grandson Viscount Linley when he married The Hon. Serena Stanhope in 1993.  Wartski also made the wedding rings (also of rare Welsh gold) for The Prince of Wales and Mrs. Camilla Parker-Bowles, The Duchess of Cornwall, for their wedding in 2005.

The History of Jewelry is record keeper for this famous royal engagement ring, and other jewels the Duchess wore on her wedding day which included  Queen Mary's Durbar diamond Tiara and Queen Alexandra's diamond and emerald welsh brooch and The Queen Mother's diamond strap watch.

Photo Credit: First Day at Ascot 2009 The Royal Procession, with the arrival of members of the Royal family and their guests in carriages, is a highlight of the Royal Ascot racing meet.

Have You visited the Famous Jewelry Collections?

Return to the top of Duchess of Cornwall