This page, is studded with facts about diamonds and crawling with information about famous Diamond jewelry!

Let the curtain rise, with a rare gem of a Diamond Bracelet with royal connections to the Lion King, Edward VIII of England, who showered Wallis, Duchess of Windsor with money and jewels, including the scintillating Cartier Diamond Bracelet, pictured in the image below.

Wallis Simpson wore this exact Cartier Diamond Charm Bracelet on her wedding day, at the Château de Candé on the 3 June 1937. 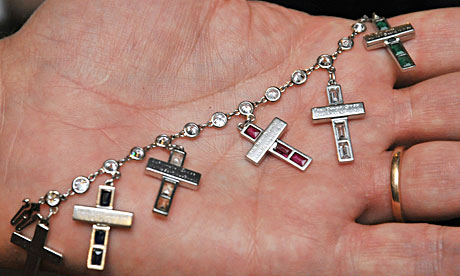 Diamond-encrusted Cartier Charm Bracelet from the Duchess of Windsor’s Collection, including a cross commemorating her appendectomy yes, you read that right.  Photograph: Nils Jorgensen / Rex Features

Return to the top of Facts About Diamonds