Flecks of Gold on A South Pacific Island

by Pamela on a South Pacific Island 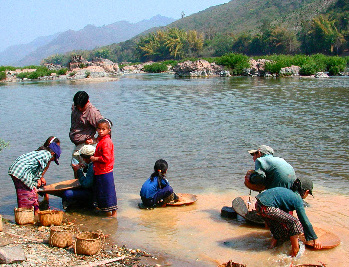 I'm writing about gold mining, specifically, getting flecks of gold out of a river today.

Now, I'm bone tired as I write this. I did something today that Indiana Jones would have been impressed by.

I just took my corpulent, over indulged, out of shape, one glass of wine too many, sorry ass up a mountain to visit a group of men, women, and children living in the most difficult circumstances that you could possibly imagine. These people were...absolutely real! You would have loved the eyes of the women with their corn cob pipes.

No French antique cameo to be seen here!

I would rather spend ten minutes with any one of them than have an opulent lunch with Ben Bernanke. I guess Ben and Tim and Henry or any one of those fat cats on Wall Street would faint at the very idea of living the way I just saw these people living in their daily struggle to stay alive by getting flecks of gold from a river!

They hike up this trail that would kill a camel and they live with almost nothing. When they want to come to town they start at 2 in the morning and walk for 8 hours on a nearly impossible path knee-deep in mud. They work hard getting the little flecks of gold out of the river. They have only kitchen pans, and an old spring from a truck is their only tool for moving the big rocks. They may deserve it but nobody gives them a bonus for their flecks of gold.

I took a local doctor with me, along with my great crew, and we all struggled to make it up the mountain to their village, this after the worst 2-hour drive on the planet; it could not be classified as a road, more like a muddy river we attempted to drive up.

I am not a do-gooder. I don't like do-gooders and probably never will, but I have to admit that today it felt good to alleviate a little human suffering. We treated the fungal infections that are just rife in the village.

People whose skin is covered with an itchy scale akin to ringworm that just makes their lives miserable. You could not look at little children whose entire bodies were a mass of sores and not feel for them! For the equivalent of 20 US dollars each, we could dramatically improve their lives.

So in a long-winded way, I'm trying to say that money matters, that macroeconomics matters,  no matter where you are on this planet. We are all connected in one way or another and when one group thinks that it's got a special place in the world, a place where they don't even want to know how most people on the planet live, well, I'm not so sure that makes it special or just blind.

I think these blind people have weaseled their way into positions of power, where they make decisions that affect a lot of people. People who don't know anything about and apparently don't want to know.

In one of your pieces, you wrote something I have never forgotten. You said you were not really an economist, but more of a philosopher who uses investing in gold and the economy as a platform. I loved that idea, Bill. (Bill Bonner for the Daily Reckoning Australia)

Any of us that are fortunate enough to have time not spent struggling to stay alive, have an obligation to think about the whole, not just our own little world where we think nothing of pushing buttons to get what we want.

If you stand back and look at the macro of life, (sweat dripping off your chin clears things up!) we are all part of the whole, and when we lose that perspective, we lose more than money and flecks of gold.

Somehow I think that is really what this financial crisis is about. Loss of perspective.

Return to the top of Flecks of Gold