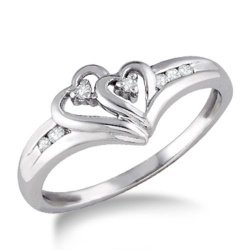 The Promise Ring meaning is about commitment - usually, but not always to a monogamous relationship. There are other reasons that a promise ring is worn, covered further down on this page.

Promise rings can be worn on any finger, but those symbolizing pre-engagement are generally worn on the left ring finger; sometimes, the left middle finger or right ring finger is used instead to prevent confusion with an actual engagement ring.

In the History of Wedding Rings the Promise Ring is worn as a token of commitment to one another given Before the Wedding Ring.

It basically serves a similar purpose as the ancient FEDE Ring (Italian word for TRUST) did. The Fede Ring is decorated with a pair of hands clasping each other that form the bezel. Usually Fede rings were made of silver, sometimes gold. They have been used since ancient Roman times and were popular throughout Europe from the 12th until the 18th century.

When & Why People Give a Promise Ring

When giving a Promise Ring it is important to be up-front about the terms of the promise. A handwritten note accompanying the ring, read prior to opening the gift, can clarify your sentiments.

Here is the meaning of the Keeper Ring:

The "Keeper" ring is also known as a GUARD ring that was introduced in 1761 by King George III who presented a wedding ring band encircled with diamonds to his bride, Queen Charlotte.

Keeper rings, once the privilege of only the aristocracy (until the late 1800's) quickly filtered down to all of us - the common masses.

Promise Rings and the Keeper Rings do however have one thing in common. Both of these types of rings fall into the category of unique rings and sentimental jewelry, loaded with intimacy and personal significance for the owner.

Return to the top of Promise Ring Meaning