One Hundred Gold Facts - No Bull 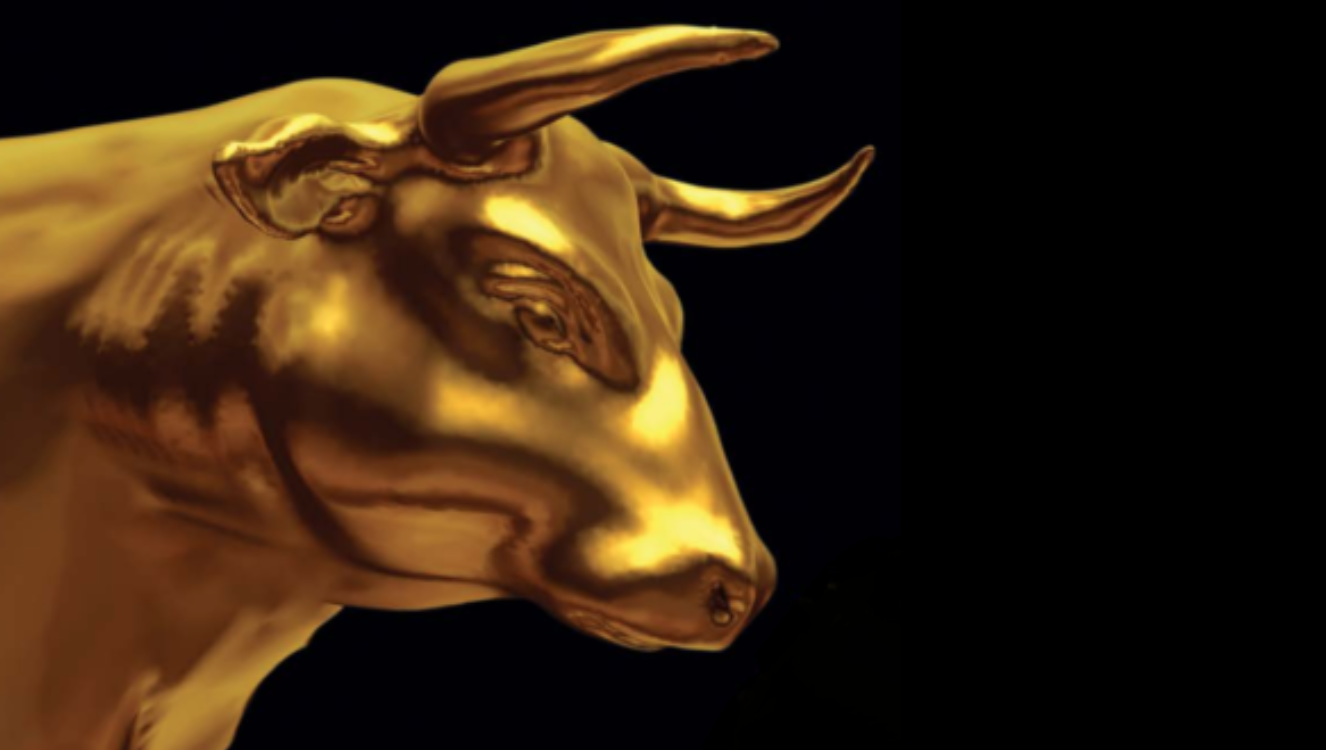 No Bull Gold Facts: A bull market for gold means a situation in which the price of gold tends to go up.

The Following One Hundred Gold Facts will interest investors with their eye on the gold price,  and considering Buying Old Gold Today.

Still sitting on the fence, growing more concerned each passing day, about the real worth of your crazy fiat money?

Information on How To Invest Money in physical gold, minus the bulls jargon, has never been more important in light of today's uncertain economy.

These are the  Gold Facts - No bull' in Around.

1. Gold is Money.  It can increase and decrease in value depending on the gold price.

2. Gold is a chemical element with the symbol AU.

4. Gold has been sought for coinage, jewelry, and arts since the beginning of recorded history.

7. Gold is the most malleable metal known.

8. Gold is the most ductile metal known.

9. Gold has a bright yellow color which is maintained without oxidization in air or water.

10. Gold is a coinage metal and serves as a symbol of wealth and store of value.

11. Gold has been linked to a variety of symbols and ideologies.

13. Modern industrial uses of gold include dentistry and electronics.

14. Gold is used because of its resistance to oxidative corrosion and its quality as a conductor of electricity.

16. Gold is insoluble in nitric acid, which dissolves silver and other base metals.

17. Nitric acid is used to confirm the presence of gold in items.

18. Gold is the most malleable and ductile of metals.

19. A single gram of gold can be beaten into a sheet of 1 square meter.

21. Gold leaf can be beaten thin enough to become translucent.

23. The alloys gold creates can be produced to modify the hardness and metallurgical properties and control the melting point or create exotic colors.

24. Gold is used as a conductor of heat and electricity.

26. Gold is chemically unaffected by air, moisture and most corrosive reagents.

27. Gold ions in solution are readily reduced and precipitated out as gold metal.

30. The color of pure gold is metallic yellow.

31. Gold, cesium, and copper are the only metallic elements with a natural color other than gray or white.

32. Gold reacts differently, depending on subtle relativistic effects that affect the orbital around gold atoms.

33. Common colored gold alloys such as rose gold can be created by the addition of various amounts of copper and silver.

34. Gold has only one stable isotope, Au, which is also its only naturally occurring isotope.

35. Gold has been widely used throughout the world as a vehicle for monetary exchange, either by issuance and recognition of gold coins or other bare metal quantities or through gold-convertible paper instruments by establishing gold standards in which the total value of issued money is represented in a store of gold reserves.

36. The amount of gold in the world is finite and production has not grown with the world's economies.

38. In the 20th century, the world's gold reserves and their trading market have become a small fraction of all markets and fixed exchange rates of currencies.

39. At the beginning of World War I the warring nations moved to a fractional gold standard, inflating their currencies to finance the war effort.

40. After World War II gold was replaced by a system of convertible currency following the Bretton Woods system.

41. Gold standards and the direct convertibility of currencies to gold have been abandoned by world governments, being replaced by fiat currency in their stead.

42. Switzerland was the last country to tie its currency to gold; it backed 40% of its value until the Swiss joined the International Monetary Fund in 1999

43. Pure gold is too soft for day-to-day monetary use and is typically hardened by alloying with copper, silver or other base metals.

44. The gold content of alloys is measured in carats (k).

46. Gold coins intended for circulation from 1526 into the 1930s were typically a standard 22k alloy called crown gold, for hardness.

47. Modern bullion coins for investment purposes do not require good mechanical wear properties and are typically fine gold at 24k.

48. The American Gold Eagle, the British gold sovereign, and the South African Krugerrand continue to be minted in 22k metal in historical tradition.

51 There are several coins of the Australian Lunar Calendar series, and the Austrian Philharmonic.

52. In 2006, the United States Mint began production of the American Buffalo gold bullion coin with a purity of 99.99%.

53. Many holders of gold store the form of bullion coins or bars as a hedge against inflation and other economic disruptions.

55. Because of the softness of pure (24k) gold, it is usually alloyed with base metals for use in jewelry, altering its hardness and ductility, melting point, color, and other properties. Alloys with lower caratage, typically 22k, 18k, 14k or 10k, contain higher percentages of copper, or other base metals or silver or palladium in the alloy.

56. Eighteen carats gold containing 25% copper is found in antique and Russian jewelry and has a distinct, though not dominant, copper cast, creating rose gold.

57. Fourteen-carat gold-copper alloy is nearly identical in color to certain bronze alloys, and both may be used to produce police, as well as other, badges.

59. Fourteen and eighteen-carat gold alloys with silver alone appear greenish-yellow and are referred to as green gold.

60. White gold alloys can be made with palladium or nickel.

62. High-carat white gold alloys are far more resistant to corrosion than are either pure silver or sterling silver.

64. In medieval times, gold was often seen as beneficial for the health, in the belief that something that rare and beautiful could not be anything but healthy.

66. Some gold salts have anti-inflammatory properties and are used as pharmaceuticals in the treatment of arthritis and other similar conditions.

67. Only salts and radioisotopes of gold are of pharmacological value, as elemental (metallic) gold is inert to all chemicals it encounters inside the body.

68. Injectable gold has been proven to help to reduce the pain and swelling of rheumatoid arthritis and tuberculosis.

69. Gold alloys are used in restorative dentistry, especially in tooth restorations, such as crowns and permanent bridges.

70. Colloidal gold is a suspension of nano-sized particles of gold in a liquid which is usually water.

71. Colloidal gold is used in research applications in medicine, biology and materials science.

72. Gold, or alloys of gold and palladium, are applied as conductive coating to biological specimens and other non-conducting materials such as plastics and glass to be viewed in a scanning electron microscope.

73. Gold produces a high output of secondary electrons when irradiated by an electron beam, and these low-energy electrons are the most commonly used signal source used in the scanning electron microscope.

74. Gold leaf, flake or dust is used on and in some gourmet foods, notably sweets and drinks as decorative ingredient.

75. Gold flake was used by the nobility in Medieval Europe as a decoration in food and drinks, in the form of leaf, flakes or dust, either to demonstrate the host's wealth or in the belief that something that valuable and rare must be beneficial for one's health.

76. Goldwasser is a traditional herbal liqueur produced in Poland, and Germany, and contains flakes of gold leaf.

77. There are some expensive (~$1000) cocktails which contain flakes of gold leaf.

78. Since metallic gold is inert to all body chemistry, when it is eaten it adds no taste nor has it any other nutritional effect and leaves the body unaltered.

79. Gold solder is used for joining the components of gold jewelry by high-temperature hard soldering or brazing.

80. Gold can be made into thread and used in embroidery.

82. Gold produces a deep, intense red color when used as a coloring agent in cranberry glass.

83. In photography, gold toners are used to shift the color of silver bromide black and white prints towards brown or blue tones or to increase their stability.

84. Gold has been known and used by artisans since the Chalcolithic (Copper Age).

85. Gold artifacts in the Balkans appear from the 4th millennium BC, such as that found in the Varna Necropolis. 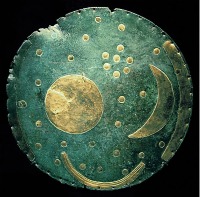 86. Gold artifacts such as the golden hats and the Nebra Sky Disk (photo right) appeared in Central Europe from the 2nd millennium BC.

87. Egyptian hieroglyphs from as early as 2600 BC describe gold, which king Tushratta Mitanni claimed was "more plentiful than dirt" in Egypt. Evident in the  Mubarak Egyptian Gift Collection

88. Egypt and especially Nubia had the resources to make them major gold-producing areas for much of history.

89. The Romans developed new methods for extracting gold on a large scale using hydraulic mining methods, especially in Spain from 25 BC onwards and in Romania from 150 AD onwards.

90. The Mali Empire in Africa was famed throughout the old world for its large amounts of gold.
By the beginning of the 14th century, Mali was the source of almost half the Old Worlds Gold. Gold dust was used all over the empire but was not valued equally in all regions

91. The European exploration of the Americas was fueled in no small part by reports of the gold ornaments displayed in great profusion by Native American people.

92. Although the price of some platinum group metals can be much higher, gold has long been considered the most desirable of precious metals and its value has been used as the standard for many currencies in history.

93. Gold has been used as a symbol of purity, value, royalty, and particularly roles that combine these properties.

94. There is an age-old tradition of biting gold to test its authenticity. Although this is certainly not a professional way of examining gold, the bite test should score the gold because gold is a soft metal.

95. Gold in antiquity was relatively easy to obtain geologically, however, 75% of all gold ever produced has been extracted since 1910

97. One main goal of the alchemists was to produce gold from other substances, such as lead— presumably by the interaction with a mythical substance called the philosopher’s stone.

98. Their symbol for gold was the circle with a point at its center (☉), which was also the astrological symbol and the ancient Chinese character for the Sun.

99. During the 19th century, gold rushes occurred whenever large gold deposits were discovered. The first documented discovery of gold in the United States was at the Reed Gold Mine near Georgeville, North Carolina in 1803

100. Because of its historically high value, much of the gold mined throughout history is still in circulation in one form or another.

Return to the top of Gold Facts

The Gold Price is Updated Every Minute