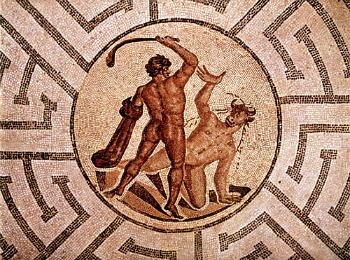 There are many names for the Greek Key Pattern. These include Greek Fret, Greek Key, Labyrinth, Maze, and the Meander Pattern, (the latter named after the Maeander River, the historical name for the Büyük Menderes River in Turkey).

Investors in Georgian Jewelry enjoy having authentic examples of the Greek Key, commemorative of the late Georgian period.

Greek Key patterns were incorporated into Georgian jewels of the late Georgian period. This ancient design can also be seen in later historical periods, such as the Art Deco Period, right up to the present.

The pattern originated from Greek mythology and was symbolic of the labyrinth that imprisoned the Minotaur. In Greek mythology the Centaur had the torso of a person combined with the body of a horse.

In a time when most people couldn'tread or write,  myths were the most effective way to pass knowledge and teach people about moral virtues, cosmology, love, death, forgiveness, and everything that is present in our daily lives.

The pattern is often incorporated as a border design  around a ring,  bracelet or Cameo surround forming a running ornamental design of repeated symmetrical figures.

Antique Jewelry with the Greek Key Motif is becoming increasingly harder to find, due to the fact, that Antique Jewelry collectors do not like parting with these amazing meandering patterns. Georgian jewelry featuring a Greek key pattern is highly desirable, and you will pay more for Antique Jewelry where the ancient Greek design appears.

The pattern is also known as a running ornament or 'meander' when the design is continuous or intertwined as foliage meanders. The Meander motif, when used in architecture in Anatolia in Turkey, is referring to the river "Meander." The Spiral Meander motif has a long history in the Mediterranean.

If the decoration forms interlaced patterns it is known as Guilloche and is also found in Classical Greek and Roman architecture including Georgian Revival, Greek revival, Neoclassicism and Second Empire.

The Greek Key design isn't only found on jewelry. In the photograph below is a pavement in the streets of Rhodes, made from beach stones, featuring the "meander" Greek key pattern!

The work of Hannes Grobe

Curved or angular variations of the same key patterns are also in existence. Being very ancient motifs they occur in the earliest farming communities in Anatolia in the six millennium BC and were a major feature design in pottery decoration throughout Neolithic Europe.

Designs based on spiral scrolls, circles, and meandering bands are typical of the art of the Mycenaean civilization on the Greek mainland in the middle of the second millennium BC.

During the Georgian neoclassical movement when Europe was having a revival in classical Greece, the Greek key pattern above all others signified Greek style and taste.

The connection with water persisted into Roman times when the motif was frequently used on mosaic floors in bathhouses.

Men's Jewelry may also include the key pattern. Jewelry art historians will know, that throughout the History of Jewelry men have been wearing  jewelry for just as long as women, but for slightly different motives.

Women’s jewelry has been generally worn to enhance a woman's  beauty while  in Jewelry History, men have worn jewelry as a status symbol, badge of rank, or for recognition of achievement. But times are changing and changing fast. This ship is slowly turning around.   Genders continue to expand and at the time of writing (2020)  there are now 33 recognized terms, Australians use to ifentify themselves.  If it floats your boat - all gender identities can wear Jewelry.

Popular design motifs found on Jewelry, that are a spin-off of the Greek Key Pattern, for a male who identifies as a man, include the Celtic knot patterns, Greek key designs, Arabic geometric patterns, and abstract designs.

Return to the top of Greek Key Pattern